The Magnificent Seven performed, as their nickname would suggest, magnificently for the benefit of the Guinigi and the Republic of Lucca.

When The Magnificent Seven eventually grew old, as all people must, the secret of the Guinigi spy network, and the special rings with the diamond 7, were passed on from The Magnificent Seven to their most talented and resourceful son or daughter, and this continued on and on down the generations.

The Magnificent Seven and their descendants played critical roles as spies for the Guinigi and Lucca during many, many critical events in Lucca’s history, including the following highlights:

During the tumultuous and almost continuous years of conflict between Lucca and the Holy Roman Emperor John the Bohemian, Firenze and Pisa which lasted from 1328-1369, The Magnificent Seven provided the Guinigi super-important advance notice of enemy intentions and military mobilizations and movement.

In particular, Pisa’s attempt to annex Lucca in 1342 was frustrated largely by the heroic efforts of The Magnificent Seven’s agent in Pisa, who spread disinformation to the effect that the Black Death Plague was especially contagious by anyone who regularly drank water from the Serchio River,

as all Lucchesi do and as anyone invading them must.

During the great Siege of Lucca in 1429,

The Magnificent Seven’s man in Firenze sent word to the Guinigi that many of the Medicis had a serious allergic reaction to tordelli, which led the Lucchesi to use trebuchets on the baluardi to launch huge buckets of tordelli onto the besieging Florentine troops, ultimately causing the Medici to abandon the Siege.

Then in a shocking development, in 1487 The Magnificent Seven’s agent in Firenze proved his worth again, when he reported that

the Medici had for some unknown reason brought not one but two giraffes to Firenze.

When the Guinigi passed this information on to their friendly Lucchese rivals the Castracani family, the Castracanis tripled Lucca’s defense spending, and the city was put on HIGH ALERT!

THIS HIGH ALERT CONTINUED UNTIL 1498, WHEN NICCOLO’ MACHIAVELLI BECAME THE SECRETARY OF FIRENZE,

Much later, one of the Castracani girls married a brilliant young Lucchese named Francesco Burlamacchi, who was elected the new head of the Lucca Republic.

The Guinigi were so impressed by Burlamacchi, that the Guinigi started regularly sharing with Burlamacchi all of the information supplied by The Magnificent Seven spy network, which played a huge role in helping Burlamacchi organize the uprisings against Firenze in 1547.

In 1589, The Magnificent Seven’s agent in Pisa sent a rather prescient report to the Guinigi,

had developed some rather shocking new theories of science, that had significant military and business ramifications for Tuscany, and for the world.

It was never widely reported, but Galileo’s famous research about dropping objects of different sizes and weights from towers was secretly funded by the Guinigi,

and a large round buccellato off of the top of the Torre Guinigi.

Only later was the experiment famously repeated by dropping objects off the top of the Leaning Tower.

In 1799, The Magnificent Seven spy network went crazy, warning the Guinigi about military plans being made by Napoleon.

Unfortunately, in the Guinigi family’s single greatest strategic failure, they did not take these warnings seriously enough, and in 1805 Napoleon’s troops occupied Lucca, and his sister Elisa Bonaparte was put in charge of the city.

In 1919, The Magnificent Seven’s woman in Pisa, Tippi Tuttovinci

(during one generation in the early 1900’s, the Iacobi family in Pisa had no sons, and the Guinigi family’s special “7” spy ring was passed on to their daughter whose nickname was ‘Tippi’

passed on to the Guinigi family that Pisa was building Arena Garibaldi for its soccer team.

The Guinigi family responded by immediately putting up the capital needed for the construction of Lucca’s famous STADIO PORTA ELISA.

when it became a critical part of the Resistance

to the Nazi occupation of Tuscany.

Unfortunately, some of the messenger pidgeons were either shot or eaten by starving Tuscans during that horrible war.

Finally, the gradual spread of telephone service throughout Tuscany after World War II caused The Magnificent Seven spy network to no longer be needed.

The Guinigi family decided to hold a fabulous “Final Dinner” to mark the windup of The Magnificent Seven spy network. On April 10, 1955, a day that will forever be cherished by the Guinigi family, the Final Dinner was held at the famous Buca di Sant’Antonio restaurant in Lucca (inside the walls of course!)

The super-successful and handsome scion of the Guinigi family, Giacomo Guinigi and his wife Pia sat at the ends of a long table. Around the table were the heads of the families from Florence, Pisa, Prato, Arezzo, Siena, Livorno and Pistoia, who for many generations had loyally served the Guinigi family and Lucca as part of the spy network, and their spouses.

None of these people had ever been to Lucca, nor personally met any members of the Guinigi family, as they had always been faithful to their ancestors’ promise to Double R Guinigi way back in 1315, to always act as if they hated Lucca and never visit the city.

After an absolutely magnificent 12 course meal, with many bottles of the finest Italian wine and heartfelt toasts of family friendship and history, Giacomo Guinigi gave each of the heads of the families a large, ornate platinum box

that was stuffed full of Euros,

and shares of stock

“All of you shall always be friends of the Guinigi family! Buon fortuna my friends!” And there were hugs all around.

The last non-Lucchese to leave was Vincent Tuttovinci III, from Pisa. He asked for a private word with Giacomo Guinigi. “Signor Guinigi, this has been a fabulous dinner, and your gift to each of The Magnificent Seven families is deeply appreciated, and is accepted with enormous respect!

“But speaking confidentially only on behalf of the Tuttovinci family, I wish to express my desire to continue having a secret personal and business relationship with the Guinigi family. My family has done exceedingly well in business over the years, and we frankly have no financial or other needs whatsoever that would cause us to need to seek assistance from your family.

“But we are a little superstitious, and my wife and I feel that our family’s participation in The Magnificent Seven network over the past 700 years has somehow brought us continuing good luck,

and we want to continue to have that good luck in the future!

Giacomo Guinigi tilted his head slightly and stared intently into the eyes of Vincent Tuttovinci III. Giacomo made a decision.

“All right then, it shall be as you have said, Vincent. Tutto bene! I shall think of you as my bonamico in Pisa — and you shall have a bonamico in Lucca!”

Both men left the dinner in extremely high spirits.

Years later in 2020, trying to decide how he could learn more about the mysterious “W” from Pisa, Davide “DeDo” Guinigi had an inspiration. At breakfast the next morning with this parents and his sister, DeDo asked his super successful father Gino Guinigi:

“Papa, I know that this sounds frivolous, but … would it be possible for you to contact your influential bonamico in Pisa, Signor Tuttovinci, and ask him if he could find out who this beautiful girl from Pisa is, for whom I am making special budini di riso at one of our family’s caffe’s over on Via Burlamacchi? All I know is that her first name starts with the letter “W”, she’s beautiful, and I … I think ….”

“I think you’re falling in love with her!” DeDo’s mother laughed, thinking about the beautiful ‘W’ whom she had already met at Caffe La Soave.

Gino Guinigi started laughing himself. “With all of the beautiful eligible young women there are in Lucca, you are interested in a Pisana? Really?”

“Please, Papa, there is something special about this girl ‘W”. I’ve never reacted to any girl this way. I want to know everything about her!” DeDo pleaded.

“Ok, but Vinnie Tuttovinci is going to think that the Guinigi have started to lose it!”

After breakfast, Gino Guinigi telephoned his bonamico Vinnie Tuttovinci in Pisa. “Buongiorno Vinnie! … No, it’s nothing that important. I’m actually calling on a personal matter on behalf of my only son Davide, whom we call ‘DeDo’. … Yes, that’s the one … Well, you’re flattering me Vinnie, he wasn’t THAT GOOD playing soccer! ….  Ok, you’re right, he was pretty darn good.  Anyway, I know that this is going to sound a little bit silly, but DeDo seems to have fallen under the spell of a beautiful young woman from Pisa, and he wants to find out everything he can about her … No, this has nothing to do with Guinigi family business, I think he met her on the beach recently in Viareggio. All he knows about her is that her first name starts with the letter ‘W’, she’s very pretty, and …”

“DeDo says she has brown hair and beautiful brown eyes, and is about 5-6 or 5-7 …. She speaks very well, yes …. Well she says she’s from Pisa apparently … DeDo says she’s hosting a birthday party on Saturday, and DeDo has promised to attend and bring some very specially shaped budini di riso, to try to impress the girl! …

Look Vinnie, I realize that this is like asking you to try to find a needle in a haystack,

but if anybody could do it, you can! Doesn’t your family know everybody in Pisa?

Can’t you see if your beautiful wife or daughter knows of any girl that meets the description, whose family might have a beach home in Viareggio? ….. Ok Vinnie, thanks for looking into it, ciao!”

Vinnie Tuttovinci turned off his phone, and looked into the fabulous huge dining room of the Tuttovinci family’s palazzo in Pisa, where his wife and only daughter were having espressos with their breakfast.

Vinnie Tuttovinci’s only daughter looked at her Mom and asked: “Now what has gotten into Papa this early in the morning, to cause him to be laughing like that?”

The mother said “Wendy, I have no idea what that’s all about!” 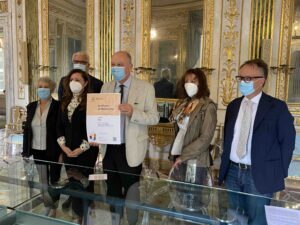