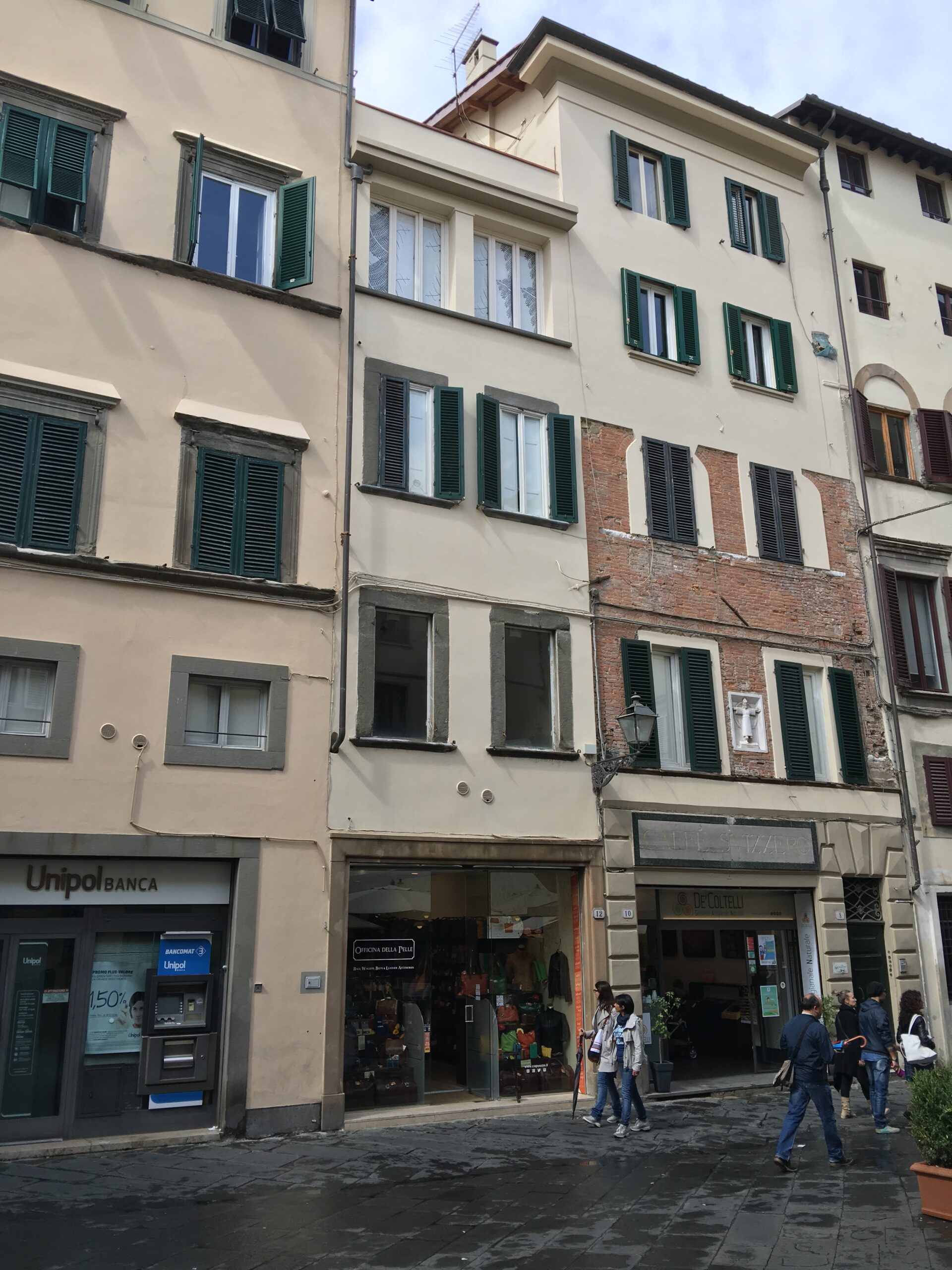 Newlywed Marianna Meschi was a marvelous cook and probably only became better with age and experience. By the time I was two, I was convinced that her rice was the best thing on earth – to this day I credit her with indoctrinating me to love Lucca.  Besides her rice, she was famous for her crochette (croquettes), polpette, sugo, tordelli, tortellini, roasts, saltimbocca and of course, fried potatoes with sage, to say nothing of her torta verde, torta di cioccolato, the list goes on and on….

Happily, Nonna Marianna’s mother in law was delighted to let her rule the kitchen and her husband, Nonno Gino, installed a state of the art kitchen when he renovated the house in via San Paolino.  But the renovation wasn’t really for aesthetics – shortly after he put his life savings, 1,000 lire, into purchasing the place, they discovered that its support beams were riddled with the tunnels of tarli – a kind of woodworm.  He replaced the centuries old wood with steel beams.

The home’s living area was on the floors above the family grocery store.  White tile covered the kitchen from floor to ceiling, with the only accent being a thin dark blue line of tile around the perimeter, three-quarters up the wall. The window at the back looked out on a tiny courtyard that had a well in the middle supplying their home and their neighbors with water for everyday tasks.  Mom said that when she was little, all the buildings in the city center – even the banks – tapped into wells for water.  But good drinking water came from the public fountains,  which were supplied by the famous 19th century aqueducts of Lorenzo Nottolini.

Nonna’s enameled stainless steel stove stood out because it featured not only gas burners, but also a central electric cooktop (for slow cooking items like soups that needed a steady heat source) and a wood-fired grill for Nonno Gino’s weekly steak.  Their white china featured the same dark blue ribbon around the edge, and their everyday utensils were German silver: an alloy of copper, zinc and nickel that never required cleaning.

The walls of the tinello, or dining room, off of the kitchen were instead covered in a chintz of flowers with a dark green background.  Mom described how the painter who installed it applied multiple layers of newsprint to the walls in order to create a barrier against moisture.  Days later, once all of this had dried properly, he applied the chintz and finished it with trim.  Their dining room table expanded from square to rectangular to accommodate the entire family.  This table was where zia Gina did her homework and learned about square roots (from her father who had only gone to 5th grade, but who understood the mathematics book).  To this day, her notes (and probably some tears) are still engraved in the soft wood of the table top which is now in our library.

A deep, hooded fireplace finished the room and was also the primary heat source for the home.  Nonno Cecco would sit in front of this hearth in the winter to stir the polenta in a copper pot over the open flame and to keep the children – particularly zio Carlo’s very active friend Giuseppe – from getting too close to the fire.

The living room walls were chocolate brown. It had two main attractions: a daybed-sofa long enough for Nonno Gino to nap on after lunch for ten minutes before he’d go back to work, and the shortwave radio that allowed them to hear news from around the world, including imams calling their followers to prayer in the Middle East.  During the war, when possessing a radio was prohibited, zio Natale would sneak over to their house to listen to the BBC and the Voice of America.

The house was built on irregular levels united by a central staircase lit by a skylight. You reached each level by going up seven steps and then turning and going up four. Going up and down the stairs of the building’s four+ stories aggravated Nonna Marianna so much that she was delighted to move to a single level apartment outside the walls, in Sant’Anna, after Mom married.

The bedroom for Nonno Cecco and Nonna Betta was one floor up from the living room. Mom remembers fondly their Empire style bed with six-foot ebony columns and a chest of drawers to match.

Then came a smaller bedroom used by Giorgia Magi and later, zio Carlo. Giorgia was Nonna Betta’s best friend.  She lived outside the walls just past Pontetetto (on the way to Vicopelago) where she owned a successful farm and vineyard that produced uva fragola, literally, “strawberry grapes” similar to muscatel, which is only good for sweet wine.  While traditional grapes wouldn’t grow on her land, she managed nonetheless to produce good, sweet vino novello (new wine) that she used to make zuppa di fragole for everyone with day-old buccellato (that she secured from Taddeucci with a discount, of course).  Giorgia was very funny and much loved by all who knew her, but she never married.  Her parents had expected her to die from smallpox as a little girl – she remembered hearing them talk about what her coffin would look like, and what they’d dress her in… but she survived and fabricated the urban legend that she had to wear a head scarf because she’d gone bald carrying bricks on her head to lay the foundation for her family’s new house.  The house still stands.  She bartered with Nonno Gino to lend him the last 100 lire that he needed to purchase the house in via San Paolino, if he’d be so kind as to let her sleep there when she brought her fruit and vegetables to market.  They struck the deal and she moved in her old chestnut sleigh bed – the same one that my son Bonamico has today 😉

Up another half level off the landing was the bathroom, which like so many, was added on to the outside of the building in back during its reconstruction. The joy was that it had running water for baths and a toilet.

Another flight up was Nonna Marianna and Nonno Gino’s room, as well as a room they designed for zia Gina when she started teaching. It was in light-colored wood in the Modernist style with a small desk, headboard and bookcase – it was the envy of all.

Finally came a room another half-flight up, that Mom shared first with zia Gina and later with zia Laura. Most memorable: the cold and scratchy sheets.  Mom and her dear friend Angela said that the adults always gave newly woven hemp sheets to the kids to break in; they theorized that perhaps the hemp oil in them kept the kids from complaining about the treatment.

Most magical moment: Mom forgot that she had put a silkworm cocoon from school into a little drawer under her bedroom mirror, until one day she opened the drawer, and a butterfly flew out…

My Mom believed that the building they lived in had originally been the tower of the adjoining palace when it was built, most likely before the year 1000.  (Zia Gina even found a mortar in the basement that looked like those used during those times.)  Via San Paolino is an original Roman road leading to Piazza San Michele, which was originally the forum.  The road bisected the old city and intersected via Fillungo, the original main street leading out of town (and Roman walls) towards the amphitheater (now Piazza dell’Anfiteatro).

The terrace on the building’s rooftop wasn’t really used for anything but drying laundry, though it played an important role in saving Nonno Gino’s life from Nazi SS pursuers, something I will write about in my next story…