Gigi Guinigi almost fell off her chair. Her little four year old son Paolo had just made such a wild suggestion, she wondered if she had heard him correctly.

“Scusa Paolo, but what did you just say to your Father?” Gigi asked.

“Mama, I just think that Papa should build a big tower with a jungle on top, with lots of monkeys

and even a gorilla!!!” Paolo said happily.

“I want to build a treehouse in the jungle and live up there!!!“

Gigi was alarmed, and looked at her husband Roberto Roberto Guinigi, also known as ‘Double R’. Double R was smiling at their little boy with an amused look on his handsome face.

“Roberto Roberto Guinigi” (she always used his formal name when she was upset), “I certainly hope that you will instruct your son that the Guinigi family does NOT live in jungle treehouses!“

Double R turned and smiled at his lovely wife, whom he enjoyed pampering. Double R assured her: “Tesoro, you know that I would never allow our son to become a jungle man” (Tarzan had not been written yet).

“But our little man has given me an idea to think about.“

After dinner, Double R retired to his palatial study, a magnificent room with a 30 foot ceiling, which was lined on three sides with books from floor to ceiling, in the manner of a wonderful wood paneled private library, which is exactly what it was.

The fourth wall had four massive glass windows, each with a gorgeous intricate mosaic depicting

a beautiful bouquet of red, pink and yellow roses,

and the view of the mountains from the Guinigi palazzo’s altana, respectively.

There was a unique, elegant, very expensive, perfectly varnished mahogany bookshelf ladder, which could slide back and forth in a perfectly polished teak rolling device, that had been specially made for the Guinigi study by the expert Lucchese woodworking firm of Giuseppe Gattino & Sons located on Via Roma.

Double R pushed the ladder about two-thirds of the way to the right on the north wall, and then he carefully climbed up about 20 feet until he found the large, thick ancient book that he was looking for.

He brought the book down and placed it on his massive, ornate wooden desk, which was about four times longer and wider than most successful people’s desks.

He looked at the ornate leather cover, which was adorned with many little shiny and valuable stones collected by the Guinigi’s trading company from all over the world.

In the center of the cover, the title of the book was painted in gold leaf calligraphy:

Double R opened the book and slowly began to study the various trees and shrubs pictured on each of the pages, paying careful attention to the author’s detailed advice regarding optimal winter and summer temperatures, rainfall, humidity, and so forth.

Meanwhile, back at the Castracani palazzo, the Duke and his beautiful wife, whom everybody loved and whom the Duke nicknamed his “Butterfly,” were having an after dinner limoncello and discussing the wildly popular composer Ilaria Puccini’s latest request to her patron the Duke.

Ilaria, who spent every waking hour either writing fantastic operas or playing with her happy little puppy called Irene,

had requested that the Duke finance a new opera that would have its world premiere at the Giglio Theater in the Fall of 1321.

The idea of the new opera was that

all of the people in the opera would be dressed up in fantastic costumes that resembled characters from famous stories and books (movies had not been invented yet) and they would happily and excitedly interact inside the walls of Lucca,

and there would be a tender love story involved.

The Duke asked his beautiful wife what she thought, and she said “I like very much the idea of happy young people in Lucca dressed in beautiful costumes imitating famous characters from stories and books, and the love story is adorable, but I’m just not sure about the leading lady’s name, my Duke — Irene?“

The Duke laughed and slapped the table gently. “As usual, we agree fully, my beautiful Butterfly! If we could only convince Ilaria Puccini to write an opera about you, my darling Butterfly!”

And the Duke immediately wrote a letter of reply to Ilaria Puccini, declining to finance her proposed Madame Irene, but emphasizing that the Duke and his beautiful Butterfly would perhaps be more interested if the name of the leading lady in the opera could be changed to something more romantic.

Impetuous and brilliant, Ilaria Puccini muttered “Moron!” as she threw the letter into her files, which for hundreds of years were passed along by her descendants, until they finally reached one young Lucchese who showed considerable aptitude for composing, and was highly intrigued by the contents of the Duke’s letter to his ancestor.

But I digress …. back to the story:

Castracani woke up early the next day, as he usually did, determined to be productive.

He began with his daily breakfast, which nearly always consisted of having

due cappuccini and due slices of toasted buccellato, one with butter on it, and the other plain.

He turned his considerable brainpower and his iron force of will back to his baby: 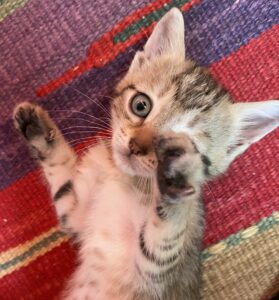