Before World War II started to impact her and her family’s life directly, my Mom finished her teaching degree but unlike her sister, Gina, who went straight to work at a middle school in Garfagnana, Mom continued her university studies.  She studied Chemistry at the University of Pisa after receiving an associate teaching degree because even though she would have preferred to become a pediatrician like a woman she admired in Lucca, her father argued that it would be too difficult to get to labs and to complete the necessary courses.  When train travel became more difficult, he refused to let her stay at a convent in Pisa as her friend Angela did, so she was forced to forgo some exams and bike her way as far as Calci for others.  At the time, the tunnel that shortens the route between Lucca and Pisa had just been drilled, but it was unlit.  She had to walk her bike through it with her little brother Carlo as a chaperone.  After he heard about the ordeal, Nonno Gino arranged for a car to take her to the next exam, but there weren’t many more opportunities to take them.

The Allies had started bombing Tuscany as a prelude to marching in.

Nonno Cecco, who was a widower, heard the bombs falling on Pistoia.  Mom, her brother Carlo, her sister Gina, and her friend Angela heard them too.

They had hiked to the top of the mountain above Coselli (where Angela lived in the summers) on the day after Easter to see the narcissus that bloomed wild at Santallago. Very soon afterwards, Nonno Cecco died in his sleep at 93.  He had expressed to them that he didn’t want to be a burden as the family mobilized to move out of the city center, and that he preferred to die in his bed.   The Allies managed to wipe out all the area around Pisa’s train station as well as the tracks, so taking exams was no longer a priority.

At 19, Mom started employment as un’impiegata di concetto (administrative assistant) at the Ministero dell’agricoltura e foreste, per il servizio dell’alimentazione in guerra (the Ministry for Agriculture and Forests, in charge of wartime food supplies for the province of Lucca.  She got an office with a large sunny window in piazza dell’Arancio, a secretary to type her work, and a boss who was one of her dad’s great friends: Omero Pierotti.  Mr. Pierotti was always entertaining and politic, probably great assets for the responsibilities of their office which accounted for and distributed the area’s agricultural products according to the regime’s rationing quotas. In addition, Mom received papers proving that she had an essential government job so that even the Germans when they arrived had to respect her role.

This was put to the test one day, when on her way past San Michele on her bike, a soldier of the SS started screaming at her: “ACHTUNG! ACTUNG!”

She stopped since he was pointing a pistol at her, and since he looked like he was 16 and desperate, she let him have what he wanted: her bike with no tires. She was furious but he was pointing the gun at her head, so she said nothing.

She went in search of his commanding officer instead.   My Mom described the SS officer as tall and intelligent looking.  She showed him her work papers which specified that she needed a bicycle to report to work.  He told her to get into his jeep and ordered the driver to go to the troops’ camp outside the walls.  When they arrived, he asked her to identify the soldier who had her bike.  The soldier was clearly terrified because he mumbled to her in Italian that he wasn’t German, he was Polish, as if that were an excuse.  The bicycle was retrieved and my Mom was allowed to ride it back into the city to work.  Later, she admitted that it was probably a pretty stupid thing to do, but that she‘d been lucky to find an officer who believed in “law and order.”

The Germans were all scavenging for all they could, she said, because the realization that they were losing the war and needed more supplies was starting to seep down to the ranks.  They committed many acts to try to suppress the partigiani and strike fear into the hearts of regular Italians.  This was the period when my mother’s family, and her aunt’s, (minus the men) fled to a villa in a village north of Lucca, named la Cappella.

My Mom and her sister Gina rode their bikes to work, rain or shine, everyday.  This is when Mom witnessed the result of the SS policy of randomly killing ten Italians for every German killed by partisans.

She saw older men whom she routinely passed on her bike on the way to work shot by the side of the road; what shook her most however, was to see a six year old boy among the dead, and to know that she might have been one of the victims too, had her commute that day been timed differently.

My uncle Carlo was 16, like his cousin Alberto, when they were refugees at la Cappella.  They were told to hide to avoid capture by the SS.  Women would put colored blankets on clotheslines when they spotted German soldiers nearing the area so that the young men and others who might be attractive candidates for Nazi workcamps could hide.  Carlo told how once he went to the very back of a grotto in the garden where there was a cave to hide in.  An SS shown a flashlight into the grotto but didn’t venture in himself after seeing a huge toad.  Soon afterwards, the SS decided to use the house for their officers because it had a very good view of the valley and road below that led to Lucca.  During this time, the Bedini and Pancaccini families (minus the boys who went into hiding in the woods) were moved into the basement from which they continued to try to live decently.  My uncle Carlo emerged from the woods with a massive beard only after the Buffalo Brigades arrived to liberate Lucca.  He volunteered to translate for them and help them, and he worked for the US Army until he retired.

During this time, my grandmother’s cousin, who was a priest in the resistance, was shot by the SS when it was discovered that he had a radio in the bell tower of his church.

Despite the fact that my grandmother had never allowed her in the kitchen, my Mom would cook for her grandfather and father when she stayed in the city to help them, which was often.

My Mom was very proud that Nonno Cecco had declared she was a very good cook.

The bombing became more fierce after he died, and the Germans became even more desperate as they prepared to retreat.  Even though there were few people around, Nonno Gino kept the Savoia open, working everyday.  One day as he walked home from work, some SS started following him and shouting to stop.  He ran and dodged into the front door of his home before they reached him.  He bolted up the four stories to the roof terrace and locked the door behind him.  He went to his neighbors’ barred window facing the terrace and pulled the bars, which swung open because it was always unlocked so that the neighbor could retrieve the toys that her child would drop thru it.  Nonno Gino lifted himself up into the window, closed the bars, locked them, and ran to hide.  After their unsuccessful search of via San Paolino 6, the Nazis left to find other people to slave for them.

When the Nazis evacuated the region and the house at la Cappella, Mom’s family moved closer to the city to a villa in Ripafratta.  This is where after the Liberation of Lucca Mom studied while Tuskegee airmen later practiced on their riverbank runway.  But in that moment, there was an unnatural calm in the air as the city awaited the arrival of the Americans.

When the bombs fell again the results were tragic, however.  Nonno Gino, zio Natale and others in the city center had stubbornly stayed in the city.  When the air raid sirens went off one day, they evacuated to the basement of the Pancaccini’s building in via Burlamacchi.  Mom remembers that the basement had very high ceilings and was very clean.  Someone had laid mattresses and blankets on the hardened clay floor to make waiting more comfortable.  Exploring revealed that many of the buildings’ basements were connected by locked and sometimes unlocked doors.  Whether they were cannon fire or bombs, Mom couldn’t recall, but they came suddenly, a lot of them.  The Pancaccini’s building was spared any damage. When they emerged to survey what had happened, however, they found that a large building in Piazza della Cervia just 50 yards from San Michele, and less than twenty feet from the Pancaccini’s, was so heavily damaged that it had to be eventually torn down.  Everyone considered it a miracle that San Michele and other historic buildings were untouched.  But several people, including my Mom’s beloved godmother and her mother were killed in the blast; her son, a boy of 7, was seriously injured.  Later Mom remembered passing by the piazza and thinking how strange it was that a glove had landed on top of one of the buildings, but then she quickly realized that it was a human hand.

The house at San Paolino 6 was undamaged except for its skylight, which had sent glass shards everywhere when it shattered.  They were very grateful to have not stayed there.  The next day, one of Nonno Gino’s contacts was already at work replacing the glass.  But the first night Mom slept there, she thought she heard a person climbing the stairs – it turned out to be a huge rat, evidently disoriented by the bombing.  Happily, Nonno Gino knew someone to take care of that problem, too.

Notwithstanding the death and destruction she witnessed during the war, Mom always tried to put a positive spin on her life, declaring herself the luckiest person in the world and focusing on how she and her family had never starved or wanted for essentials.  But it took her decades to forgive the Germans for starting the war, and for ruining her high school and college years, which should have been the best of her life.  It is no wonder to me that almost all her life my mother’s anger could be triggered when she heard German spoken – particularly by people her age or older.  The war had destroyed her generation’s plans and dreams, their happiness – she never got to finish her degree or buy a FIAT 500 and move to Milan to work. No one starved, but money was scarce.  Friends and relatives came out of hiding and prison camps mere shadows of themselves, struggling to finish their schooling and find jobs, they had little time or resources for “fun”.

It is no surprise that in 1948, then, she let her handsome adoring husband whisk her away to a beautiful community with galleries of elms on every street, where the only “German” was a hero: Eisenhower… but that will be a story for another time. 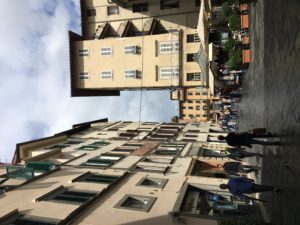 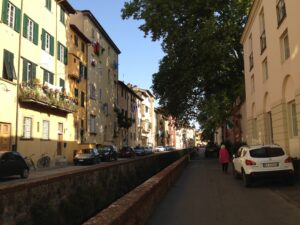