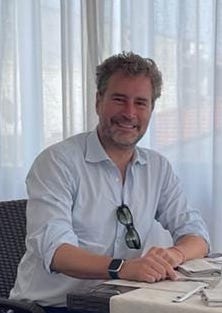 On 9 August 2022, LuccaLife.com had the pleasure of interviewing the newly elected Mayor of Lucca Mario Pardini at his office in Palazzo Orsetti.

His dynamism, intelligence, and thoughtful approach to governing the city is exciting and inspiring.

If you read this, we are sure you’ll agree with us….

The text of our interview with Mayor Pardini is in two parts. Here we focus on his personal life.

PART TWO which follows, centers on his Politics.

PART ONE – Who he is

Did you meet Justin Bieber at the Summer Festival?

No, no, the only singer I met was Zucchero because he was the most easy-going – he came into the dining area, in the midst of people. The other singers obviously preferred to be with their families. Justin Bieber was with his wife. He said goodbye and left. I didn’t go after them…

What is your favorite music?

I am a musician, rather let’s say I play around on the piano and drums. I had a band when I was in Argentina with my friend and business partner. I wrote the music of the songs and played the piano, and he wrote the lyrics and sang. We had two songs on the radio in Argentina – Mendoza radio. There are even a couple of our concerts on YouTube.

We must look for them! What was the band called?

It was called SNOb.  If you search for SNOb and Mendoza, three videos come up: DOS, CIN CIN, and

So I’d say my favorite music is melodic rock.

Who is your favorite actor?

Ricardo Darín: he is Argentine, he is very good – especially in the Argentine film that won an Oscar, called The Secret of His Eyes …

In my opinion he is great. It would be nice if he came to Lucca: maybe the Lucca Film Festival will bring him here one day.

Where did your passion for cinema come from?

As a child I enjoyed making movies with the camera we had at home, I don’t remember if it was 8mm or 35mm.  The videos lasted 3 and a half minutes. Then I took them to Mimmo at Alcide Photography to develop, and then I waited, I remember it would take a week for them to arrive, and then there was the projector, there was a whole ritual.

So in short, my love was born from Argentine film. My favorite was Profondo Rosso, a film that later became even more mythical for me because my parents wouldn’t let me watch it because I was too young. But there was a friend of mine who had seen it and so I idealized it and finally when I was allowed to see it, when I was, I don’t know, 12 years old, I had totally turned it into a myth, but in the end I wasn’t disappointed, I still think it is fundamental today.

Is it still your favorite movie?

Of that genre, yes.

Did you ever dream of becoming an actor?

No, I wanted to be a director, that was my dream. I actually don’t know why I’m here in the end, because I’ve always been behind the scenes. I liked being behind the scenes more, but then obviously I had to put my face out front.

My wife, Claudia, and our children.

Are the children proud of their mayor father?

My daughter who is six years old, yes, in my opinion, is already very proud – I see that. My son is still small, but, in short, when they came here he liked the office – he is three years old.

Will your wife have a public role?
No, my wife, let’s put it this way, I have to thank her because if she hadn’t been there, I wouldn’t be here. She kept the family going during the months that I was engaged in the electoral campaign. So if my wife wants a role later, she will have to say that; she, of course, will be the one to decide. But her role up until now has been fundamental, supporting me, helping me with the family, with the children. However, these have been very intense months when I have been very absent. Thank goodness she was there to compensate.

I lived there from 2005 to 2014 practically incessantly. Then before the pandemic, I still traveled there 3 or 4 times a year.

Do you still have interests in Argentina?

Yes, I used to make wine and that was from 2005 to 2017. The company was sold in 2017 to a large multinational group that has interests in Italy, Russia, and Argentina.  But I still have a farm, which, however, I no longer manage because since the pandemic I haven’t been to Argentina anymore, except for once in March 2020. It’s a farm that produces grapes and which at the moment is managed by other people.

Do you have any hopes of returning to Argentina?
Not until 2032. Maybe I’ll go back on vacation, but I no longer have any interests that need my input.

My partner [in the winery project] was a guy who has been my friend since we were born, and then an Argentinian partner joined us – there were three of us in that adventure.

How did you get started on that project?

It was a coincidence, because I used to live in London. I was there from 2002 to the beginning of 2005 working in finance, a different world. I went on vacation to Argentina with this friend of mine who was a journalist who had to interview a famous Italian winemaker, and I accompanied him because I had taken a video-making course in London. I worked in finance but in evenings I took this course.

He asked if I wanted to go on the vacation and also assist with the interview he needed. So with the excuse of going to do the interview, I went on vacation to Argentina and I fell in love with that beautiful country.

There were a lot of favorable economic conditions there in 2004.

I made that first trip in November 2004, and we decided that if we found a good investment – and then we found it – it would be good timing.

In fact we were right, because Argentina exploded positively again right after. Of course, Argentina is a pendulum – it goes up, it goes down – but we arrived when it was down and we saw great growth in the world of wine, which then actually stabilized as Mendoza became one of the wine capitals of the world.  An article by Wine Spectator put Mendoza on par with Florence and San Francisco as a capital of the wine world, so it has become an established place.

Which wine would you recommend buying from Argentina?

From Argentina it is important to drink Malbec or Cabernet Franc – they are the best. There are many brands, many of which are also owned by my friends, so I can’t choose one in particular. Today I recommend the wines of Lucca. I returned to hoist the flag of Lucca in Marlia.

Why come away from Argentina?

For love. Because I met my wife who is from Lucca and I returned to Lucca happily, then married. In the end, fate brought me here.  There weren’t the proper conditions to be a family there. So I came back here –  if not, I wouldn’t be here in this room. 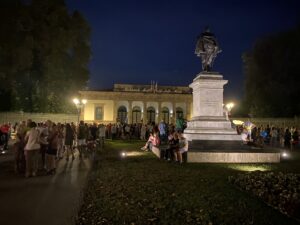 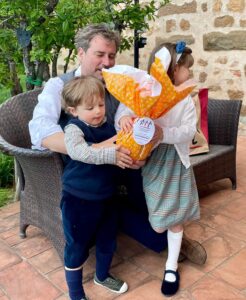 One thought on “Meet the New Mayor: an interview with Mario Pardini, newly elected mayor of Lucca”