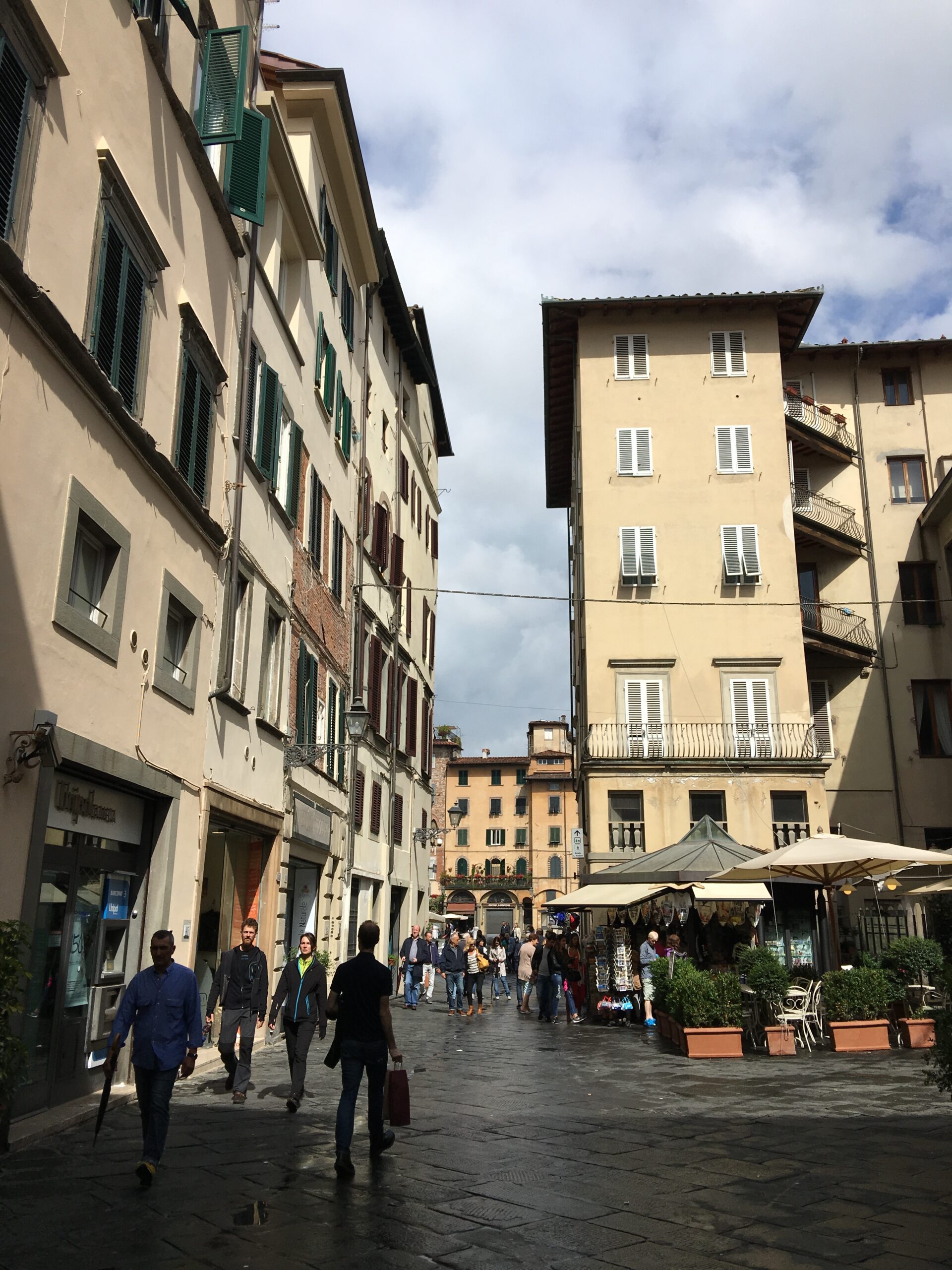 Many characters, including my Mom and her family, lived on a small piazza in the heart of Lucca within sight of the church of San Michele and Giacomo Puccini’s birthplace, named Piazza dei Cocomeri or Watermelon Square (though Mom always referred to her home as being in via San Paolino facing the square – a nuance that apparently meant a lot to her, for some unknown reason).

Travelling counterclockwise from the southwest corner of the piazza was the Albergo Aquila d’Oro, or Golden Eagle Hotel, which Mom said was elegant and had a very fine restaurant. It’s long gone, but the threshold bearing its name is still there on via San Paolino.

The centuries old restaurant, la Buca di Sant’Antonio (The Cave of Saint Anthony) in via della Cervia, next to the square, was much smaller and less elegant than it is today. In its place at the time was Bruno’s garage. Bruno was an auto mechanic and driver, who every July transported the Bedini and Pancaccini families to Viareggio for their seaside vacation, with a month’s worth of clothes and linens as well as all their children and their household help. It’s no surprise then, that everyone (excluding the mothers) would have to exit from the car and walk when they started the ascent to the top of Monte di Quiesa which blocked their way to the sea.

The next spot, proceeding around the square, was taken by the Simi saddlery shop. Given that there were always fewer horses, Simi also specialized in repairing soccer balls, which were leather at that time. Simi’s daughter Adelina, went to work for Nonno Cecca and Nonna Betta at their grocery store across the piazza.

Next came the home of Angela Francesconi, who was Mom’s best friend. She lived with her mother, Signora Elena, and her father, Dr. Frediano Francesconi who was an ear, nose and throat specialist. The doctor had his office on the ground floor of the building and the family lived above. This became important when my uncle Carlo developed tonsillitis as a little boy:  they just took him across the street to have his tonsils removed.  The trauma was cured with a lot of ice cream from Santini’s aka Angelina’s, a famous ice cream parlor in the nearby piazza della Cittadella where Puccini’s statue sits today.

Also on the same side of the piazza was a brusciafero – a blacksmith who was a favorite source of amusement.  He worked continuously making bits and stirrups and shoes for his clients’ horses, and cleaning up after them to keep his neighbors happy. Next to him was a ladies’ hairdresser, and in the square, a kiosk that sold newspapers – just as the same family continues to do today.  As Nonno Gino left for work each morning at Caffe` Savoia, the newspaper man had his papers ready to hand to him.

Across the street, on the north side of via San Paolino, was the Caffe` Svizzero, which Mom said was very nice but not as elegant as the Savoia.  The proprietor had a likeable daughter, Mara, who went to school with Mom. But no one could compete with Angela as Mom’s closest friend, Mom often said they knew one another even before they were born because their pregnant mothers would wave to each other across the square and confer about how they were feeling.  Mom was born just eleven days earlier than Angela in May 1923.

The home where my Mom was born was, she believed, originally a tower because each level was separated by 7 ½ steps with some rooms on the back and others on the front facing the piazza.  The rooms in back had windows on an open space with a view of the buildings on via di Poggio.  Once a man in the rooming house there (now the Hotel Puccini) started beating a rug out the window when the wind could catch the dust and send it to the Bedini’s kitchen window, and my grandfather yelled at him to stop and watch what he was doing, to which the man angrily replied that the Bedinis were just a bunch of “rehashed fleas” (pidocchi rifatti)!

As a baby, my Mom remembers sitting on a blanket under the front window, watching the dust float through the air as the sunlight streamed in.  Later she loved to watch through the window as Adelina, who worked in her grandfather’s store, would tell her who everyone was who walked by and all the juicy details of their past or current lives.

Among the characters were:

A family which had gone to Texas and returned with a fortune, with which they bought up all of Piazza della Cervia and more… The story was that the father had a store in Texas where you could buy anything you wanted, from a watermelon to an airplane – if they didn’t have what you wanted, they’d get it for you.  Later on, Adelina arranged for her pretty younger sister to always be at Nonno Cecco’s store when handsome Mr. Domenico, one of the sons in the family, walked by.  Conveniently, they started up a conversation, and were soon married.

Another noteworthy family was the Pacini family, which included 11 children. They were so rich that every four kids had their own babysitter, so that no one ever wanted for anything.  Their father had made his fortune in Colombia. Like all the Lucchese families at the Bagno Gino, the Pacinis rented a little villa in via Sant’Ambrogio or close to it, in order to be walking distance to the beach.

The Montauti family, however, owned a beautiful villa with a tower right on the boulevard facing the beach near the very elegant hotel Principe di Piemonte. Mrs. Montauti’s father had bragged that she had “un milion per puppora” — a million per you-know-what, which facilitated their lifestyle. One of their daughters was a little overweight and not too bright, but probably thanks to some parental maneuvering, she found a husband who was also a little overweight and not too bright, but the son of a wealthy olive oil merchant.  Mom remembers seeing the couple in the rumbleseat of their limousine giggling together – the inside of the car was full of luggage and plants.

Then there were some without names who captured Mom’s eye:

~ the incredibly elegantly dressed man in white face, who passed every morning on his way to church; and

For fun, one year when he was about 14, Zio Carlo, and Angela’s little brother, Giuseppe Francesconi, 7, along with Annibale, a boy who lived down the street from the Bedinis, set up a pulley system to pass messages to one another over the square from one side to the other. They were hugely successful, but were told to take it down, so that all that was left to look at hanging over the piazza was a shaded lamp that dripped idly whenever it would rain. 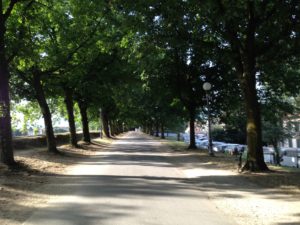 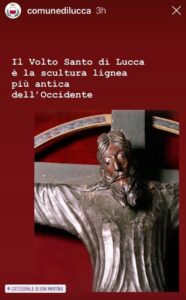