Of the total 630 acres of territory engulfed in flames over the last 48 hours, 40 acres are within the municipality of Lucca, according to a statement today by the city.  The area hit centers on the Casanova farm, between the villages of Chiatri (site of one of Giacomo Puccini’s homes) and Fibbialla, where firefighters are using three Canadair and multiple anti-incendiary helicopters to douse the flames.  The affected area is still in flux, but at the moment there are no immediate risks for the population or the infrastructure.  Mayor Mario Pardini and Assessor for Civil Protection Fabio Barsanti are constantly monitoring the situation via inspections of the areas affected by the fire.

The fires have been even less kind in the hills above Massarosa overlooking the lake of Massaciuccoli, where Puccini lived and composed, and the Mediterranean beyond. The highway above the area A11, connecting Firenze to Genova, was closed Monday night at 11 pm and is not expected to reopen in the area until Friday, July 22; some train traffic has also been re-routed.

Officially 80 persons from the area were relocated to Massarosa school buildings to wait out the crisis in safety. But the real number of displaced persons, including many tourists staying in the scenic area, is projected to be in the hundreds. Homes have been lost. Olive orchards and fruit trees burned. Some estimate that it will take up to 15 years to return productivity to its previous levels. 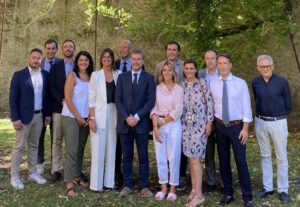 One thought on “Wildfires Rage in Lucca’s Hills”